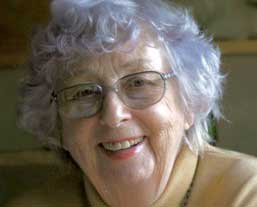 Isabelle Spencer was born in Portsmouth in 1924 and, after a university education and gaining a degree in English, came to Witney in 1946 to join the staff of a small, cosy mixed grammar school called the Henry Box School. She saw extraordinary changes to the school and was instrumental in the development and transition to the comprehensive world and finally, as Senior Mistress (she loathed the title of Deputy Head!) she taught Needlework, Art, Drama and latterly English instilling in her students a love of poetry, language and the Arts in general.

Her love of the Arts extended far outside the school: she was a founder member of the Witney Dramatic Society, writing, producing, designing and making costumes and sets for many years, and wrote and oversaw three shows for the Jill Stew School of Dance.

On her retirement from Henry Box she embarked on a second career in graphic design and calligraphy. She ran calligraphy courses for the Oxford Scribes for over 25 years and continued to support Henry Box School with the most beautifully inscribed and illuminated parchments commemorating key events – some of which can be seen today displayed in the Mary Box Room as a lasting memorial to her skill and dedication.

Isabelle will be long remembered for many things: as a strong, vibrant personality, an inspirational teacher, her wit and creativity, her devotion and support for many local activities within the community and not least for her much acclaimed calendars and of course, for her three cats.  Her extraordinarily generous bequest will ensure that her desire to bring the Arts, in all its many guises to the young people of Witney will live on for many years.

In her Will, Isabelle Spencer left a very generous bequest to Witney Educational Foundation.
​
​In 2021 a new primary school opened in Witney, Windrush C of E Primary School, as part of a new housing development.  In recognition of Isabelle Spencer's contribution to education in the town, the Town Council named the road with the new school Isabelle Spencer Way.